We are looking at the co-op game concept and design and the overall popularity of the title among players. It was tough to make an ultimate list of the best titles and make it versatile, not focusing only on shooters or MOBAs, so we hope you will appreciate it. How do you think good games to play with friends should focus on the action? Maybe, multiplayer games are more than just gameplay? That’s a question we all keep in mind when picking up a multiplayer title. 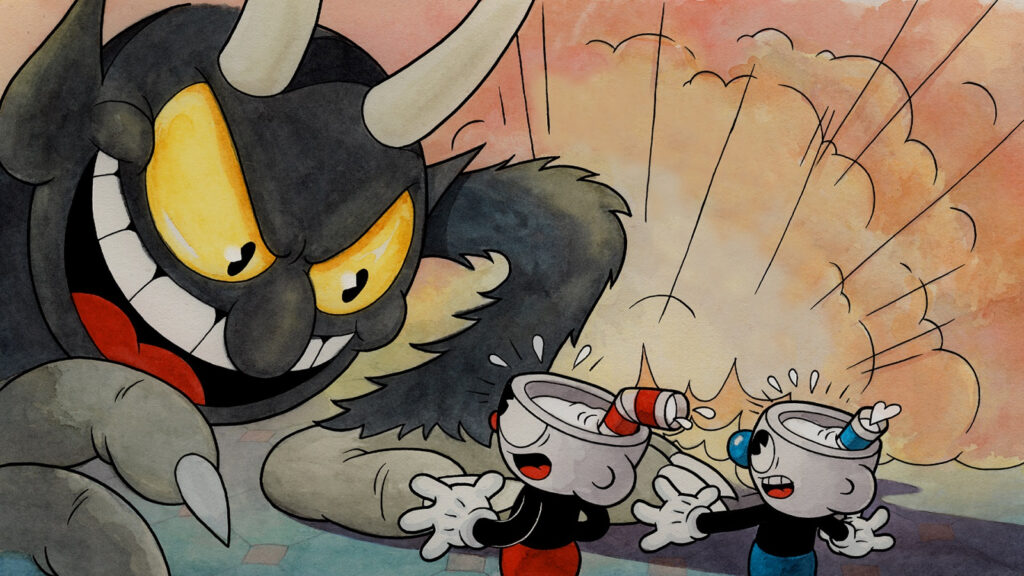 Developed by Studio MDHR, Cuphead stands out from other titles, first and foremost, by its concept and design. Inspired by the 30s cartoons, Cuphead is a rollercoaster of visuals and action. You play as Cuphead and Mugman, kids who get involved in the Devil’s Casino and have to outsmart the Devil himself. The classical run and gun platformer with role-playing elements revolve around challenging bosses and upgrading your character with charms (special abilities) and weapons – what more can you ask from the best coop games. Cuphead also has a DLC released in 2019, The

Delicious Last Course features new characters, levels, and bosses, and we are thrilled for more content from the studio.

The game has 10 out of 10 score on Steam and 4.7 stars on Google reviews, which is quite notable for a fresh release. The game also won several awards in Indie Game and Game Debut categories. If you like colorful platformers, Cuphead is for you. 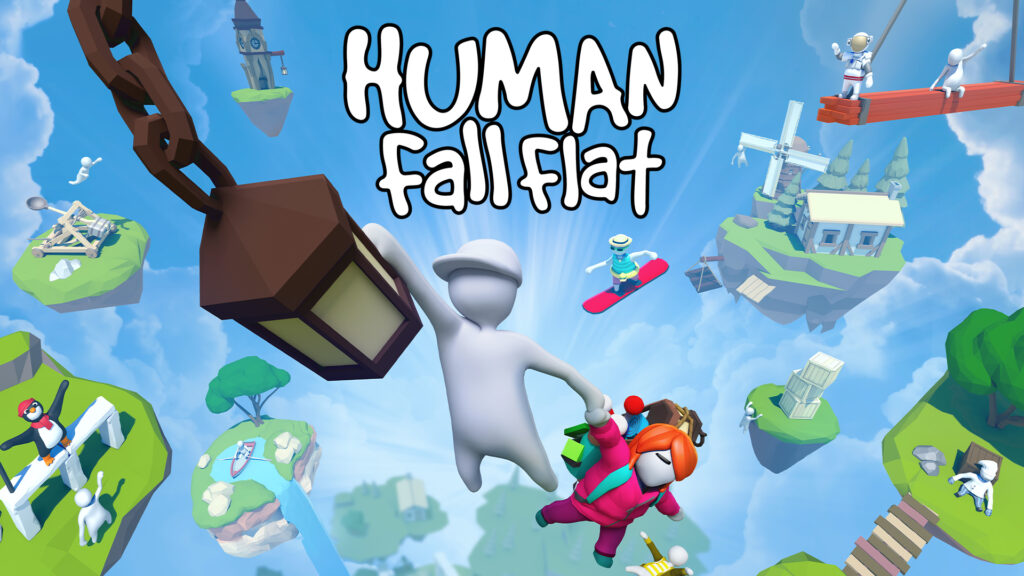 Human: Fall Flat is not your ordinary puzzle game; there’s something more to a simplistic design and mechanics developed by a Lithuanian studio No Brake Games. The game revolves around physics puzzle-solving, where you play as a Bob. You have no superpowers or extra abilities that make you a hero; you are a human being who has to do stuff. This idea sounds awfully realistic. The game mechanics and somehow tricky control make the game more of a comedy than cool action; if you have temper problems, then maybe this game is not for you. The action is repetitive, puzzles are not differing much, but the game challenges you.

Human Fall Flat holds 9 out of 10 score on Steam and 4.2 stars on Google reviews, with some mixed reviews and several awards, it’s quite a good start for an indie project. If you really want to have fun and try your friends’ abilities, pick Human: Fall Flat. 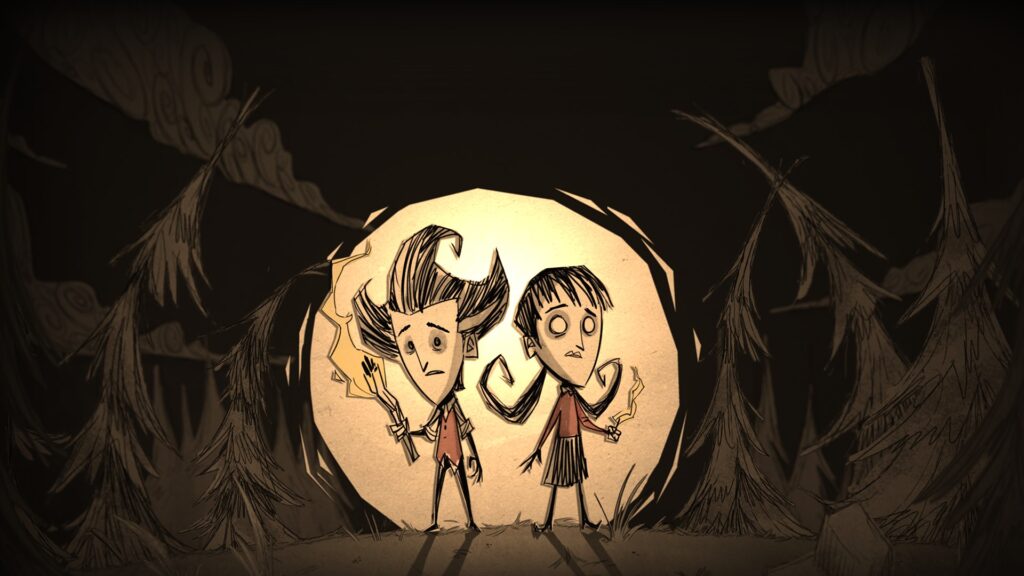 This game has a special place in our hearts with its unique design, sound production, and gameplay, and we must say that we love Don’t Starve. Klei Entertainment’s magnum opus, Don’t Starve, is a hit in the survival genre, where you have to think ahead to avoid the quick demise from starvation, monsters, or cold. Don’t Starve Together is the possibility to connect with your friends on a harsh journey. The game also includes a DLC, Reign of Giants, which provides you with more challenges and bosses to fight. It is one of the best games to play with friends to train your teamwork skills with science and magic.

The game holds 10 out of 10 on Steam and a solid 4.7 stars on Google reviews. Grab a friend and introduce them to this survival gem with awesome art and sound design. They will thank you later. 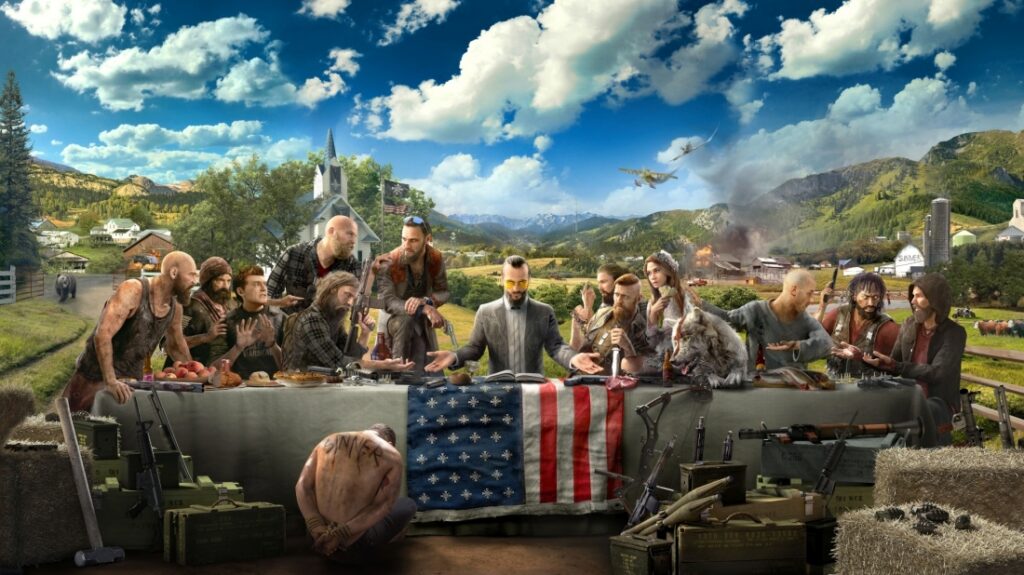 Ubisoft’s Far Cry series gained its momentum since the third part came out. It was the moment when each part of the game presented you with a compelling and engaging story, unique characters, and challenges that make you think about your morals. Not to shade the previous installments, but they were completely different co-op games in comparison to what we have now. Far Cry 5 is an action-adventure first-person shooter with elements of the open world. You have to deal with a cult, but we won’t tell you anything more not to spoil the experience for you. Overall, the gameplay and combat mechanics remained similar to previous installments of the franchise. In the multiplayer, you also have the possibility to create and share maps and accomplish coop objectives.

The game was received positively with 7 out of 10 score on Steam, although the game setting created some controversy. It won the Best Action Game award and sold 5 million copies. If you want to join the Far Cry series, it is time to do so with multiplayer missions. 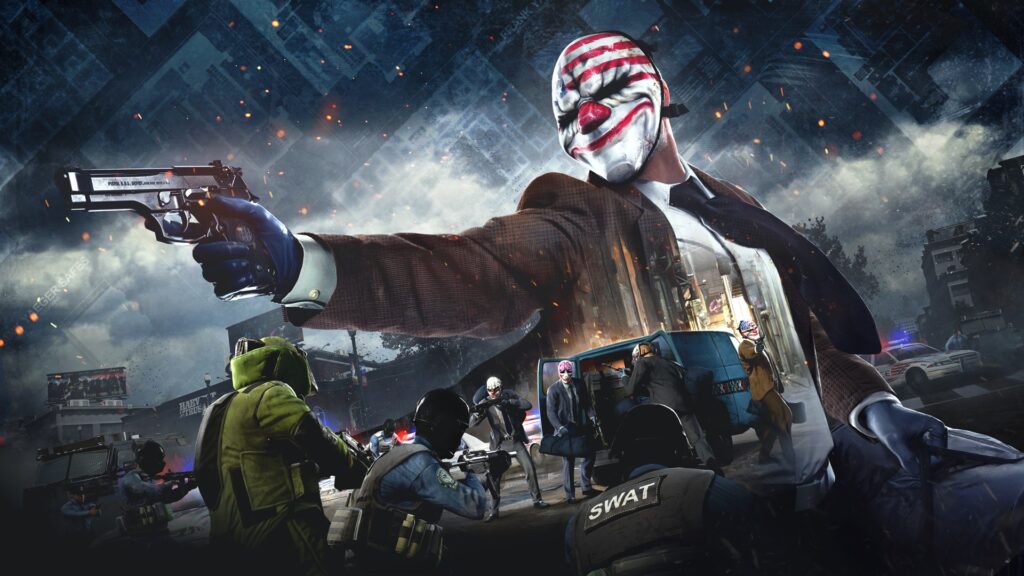 Overkill Software’s first-person shooter that you can play alone or with up to three teammates. You build your gaming strategy depending on the level and map. Most levels require your quick reaction and employment of strategic skills. Another type of gameplay involves stealth and your ability to avoid being noticed (the lack of guard kills, being caught on camera). The game also includes many more modes than it is possible to describe in a short review. You accumulate the in-game money and experience as well, spending it on the improvement of your weapon and character advancements. We may call it a counter-strike but more stylish and elaborated.

Payday 2 was received even better than expected back in 2013, with all physical copies being sold and co-op games distributed mostly via console and streaming networks. If you want a good action shooter and a unique character in the universe of Payday 2, then it is your chance. 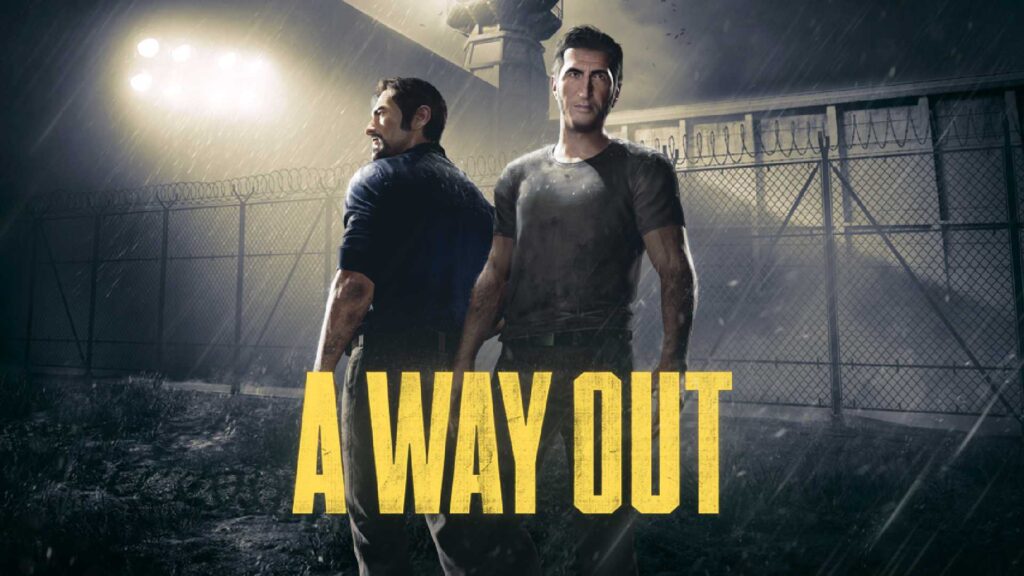 The word ‘cooperation’ is entailed between the lines of this game’s code. If you want to experience some narrative-driven action, you should try Hazelight’s unique take on the cooperative experience. You play as two outlaws who need to escape the prison, and you have to pay attention to the flashbacks, but you are never restricted from the freedom of movement and exploration. The game uses the split-screen, and you really have to cooperate to achieve the common goal. You can also enjoy the minigames and other fun references within the game (if you are a film fan).

The game received several game awards and general appraisal of the gameplay and game mechanics. If you like more cinematic experience that still doesn’t look like a series of quick-time-events, then A Way Out will be your first choice for the best coop games.

4. Snipperclips Plus: Cut it Together 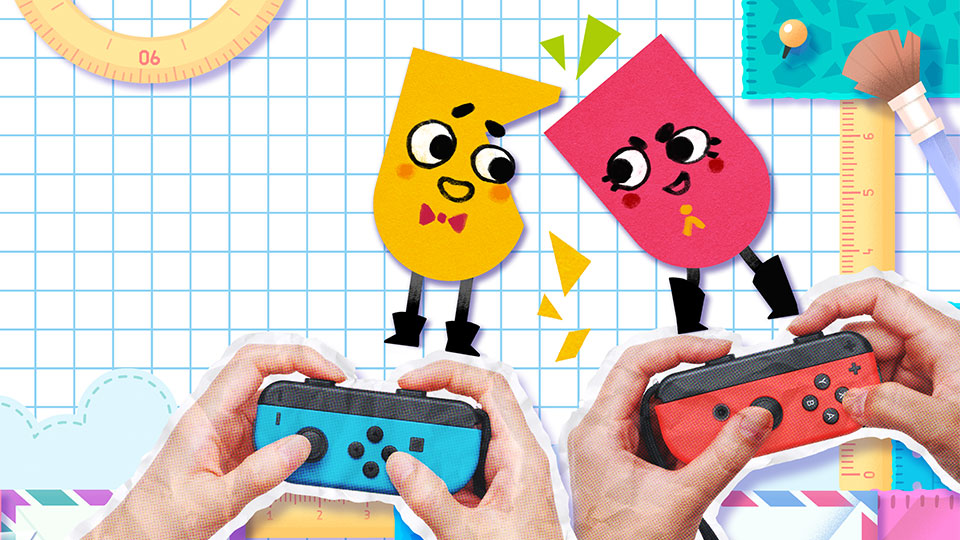 It is important sometimes to relax, put away all competitive titles, and enjoy good ol’ puzzles. Another puzzle video game by SFB Games, the exclusive for Nintendo Switch. Snipperclips is designed to play in co-op with up to four players, while the main world is made for two players. The game has 30 levels, 8 from which are derivatives from the first world. Some of the levels are quite new, and you will appreciate this head-scratcher. The game also has a Stamp Mode, which resembles a Paint program on PC. You can create a true masterpiece with your friends, using different colors and your characters as stamps.

The game is perfect for playing with your family and kids, your significant other, its one of the best fun games to play with friends. There are no restrictions by themes or difficulty. It received several prestigious awards in the Family & Kids Game category. Our choice for best co-op games for all family. 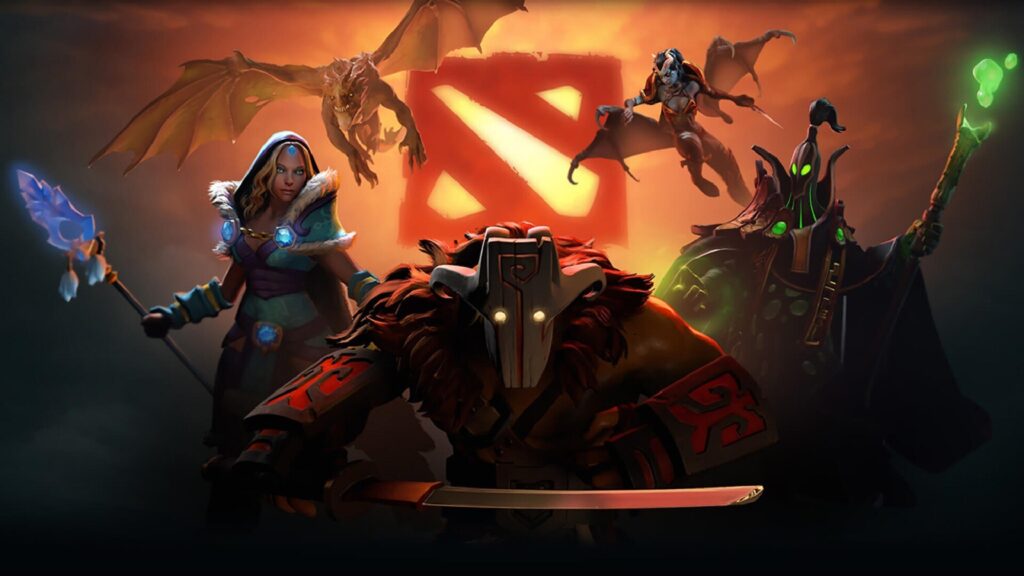 Valve’s critically acclaimed MOBA, Dota 2 is considered to be one of the best games to play with friends for quite some time. Of course, this game is not for everyone. It requires some attentiveness and commitment. More than anything, it requires anger management techniques and the possibility to detach yourself from the game. You have to pick your characters carefully, learn their abilities, and understand your role in the game. As soon as you figure out these minor aspects, you will understand why people are still playing the game, and its popularity doesn’t cease.

The game is free to play, and some items can be purchased within the in-build system. Currently, 660 thousand concurrent players play in Dota 2 every day, and the vast majority of experience with the game is positive. If you want to enjoy a good old multiplayer battle arena game, then Dota 2 is the first choice that comes to mind. 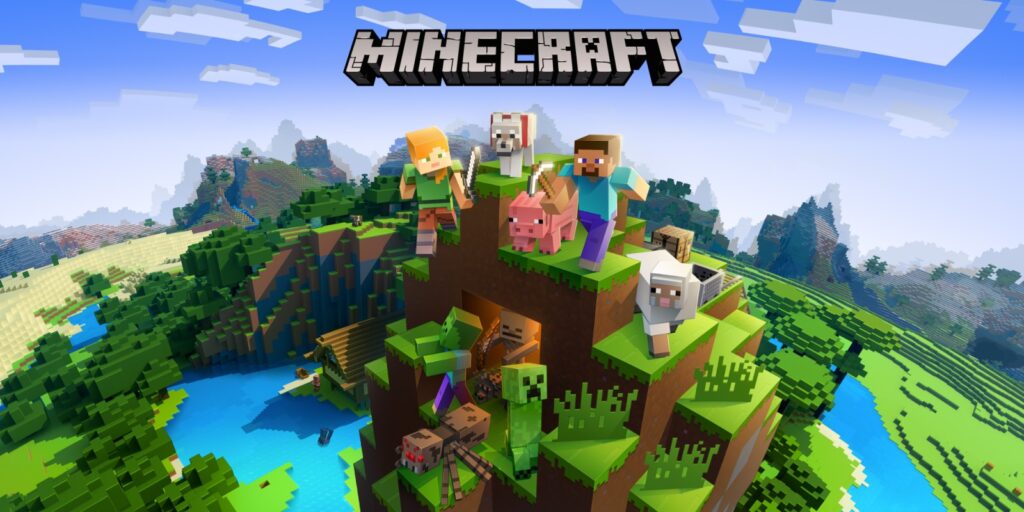 Mojang Studios’ sandbox game, Minecraft, has achieved something that every developer dreams of: to be widely recognized and ingrained in popular culture. Even if you never played Minecraft, you know someone who experienced it. The game is based on an achievements system, where you can play in different modes and various complete goals. In multiplayer, you can use a local split-screen to challenge other players or cooperate and share their achievements. Here you train how to survive, plan, and create the winning strategy for your dream project.

Minecraft became one of the most played games with 126 million active users and millions of copies sold. It is hard to tell that game celebrated its eleventh birthday due to its unique design and universally understood game goals. If you are looking for one of the most engaging and addictive co-op games, then Minecraft is your first choice. 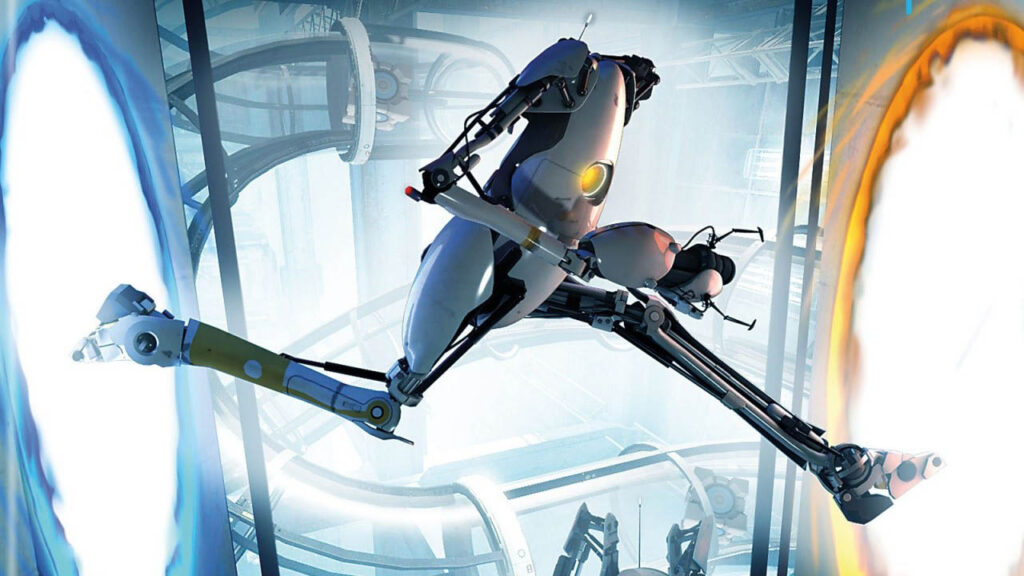 Valve’s beloved puzzle-platformer that features everything we love in the series: physics and good old platformers. The first person perspective makes it even more fun to play. You and your friend play as the two robots, Atlas and P-Body, who have to go through trials designed by the Aperture Science laboratory’s great minds. As you play, you also reveal some secrets behind the laboratory. The game is about six hours to play, but the replayability is quite high – you can always try to find new ways to play through the levels or try to speed-run it.

The winner in Puzzle Games and Anticipated Games categories, Portal 2 is here to stay and turn into an eternal classic of cooperative puzzle-platformers. The undeniable 10 out of 10 score on Steam and 4.9 stars on Google reviews underline that Portal 2 is the first choice to think about the best games to play with friends of all time.

Of course, we are used to thinking about the competition when we talk about multiplayer games. Surely, the vast majority of them focus on overthrowing your opponent team and gaining as many points as possible. We also love this aspect in games – being rewarded for our skills and receive deserved recognition. However, not everything in multiplayer is about fighting. The best multiplayer games manage to teach us about cooperation and coordination, about having fun and finding it in missions and levels. We tried to include games that aim to teach us how to enjoy the cooperation without the pressure to win the opponent teams, but we also included the classical multiplayer games because it is hard to imagine the list without them. Do you think we could include more titles? Do you know some multiplayer games that are different from any other example we listed?

At the same time, we highly encourage you to check our YouTube channel and subscribe to our WhatsHappening community. Every day, dedicated professionals search for the best titles and events in games, films, and pop culture to report it for you. Join us to always stay updated!