Cyberpunk is a relatively young sub-genre of science fiction. Famous novels such as “Neuromancer” and “Do Androids Dream of Electric Sheep?” established the canons of the genre. Movies like “Terminator” and “Bladerunner” gave cyberpunk distinctive visuals. Finally, the best cyberpunk games inherited all these elements and mixed them in an interactive format. As many games are united by a single theme, cyberpunk games unite different moods and settings. Video games of the cyberpunk genre may be set in the distant future and in modern days, explore philosophical themes of transhumanism or simply give a player a chance to shoot as a fancy cyborg. You may like the aesthetics and visuals of the genre, or explore the deeper context of the real-life crises – the items of the list will give you the substance for any of the requests. In this list, we want to present to you the best cyberpunk games in the cyberpunk genre available at the moment. These best cyberpunk games were recognized by gamers and critics alike, so you should give a try to each position of our top. 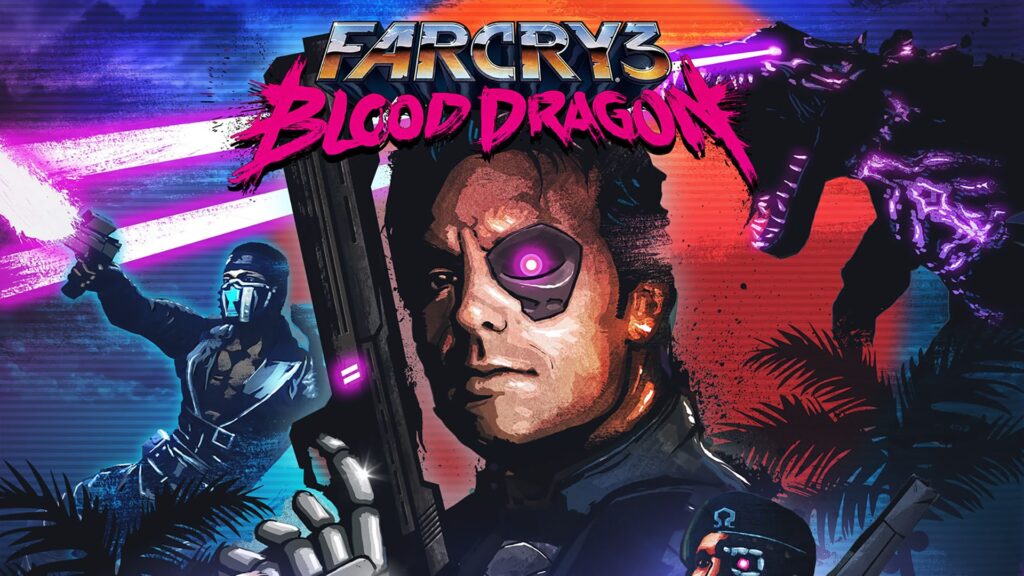 This stand-alone add-on to the original Far Cry 3 was a huge success for a small game. We play as Sergeant Rex “Power” Colt and take part in VHS 80s action. The game ridicules B-movies cliches in a witty way, including making fun of video game stereotypes and conditionalities. Rex Colt may be placed in the same line as legendary Duke Nukem or Serious Sam for his charisma and masculinity. The visual style of Far Cry 3: Blood Dragon follows the retro-wave style, which contributes to the authenticity. The gameplay part remains mostly similar to the original game: we still explore the tropical island, shoot the enemies, and upgrade our equipment. However, the humorous tone and sarcasm, in combination with the unusual setting, create fresh impressions from the process. 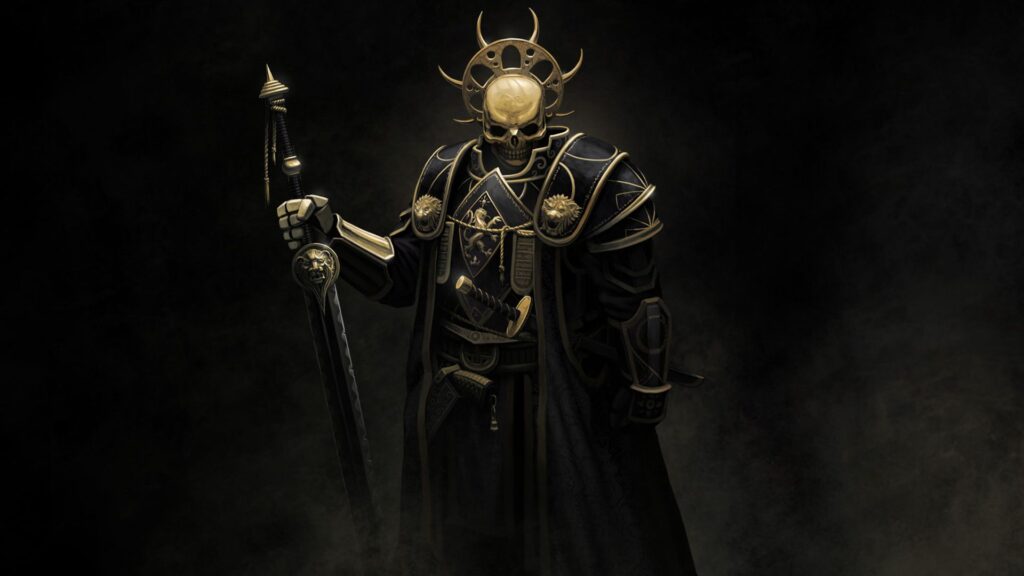 E.Y.E: Divine Cybermancy is a dark horse of the best cyberpunk games, but it’s worth trying anyway. The game was developed by the indie company Streum On studio and released in 2011 on Steam. The obscure beginning and unobvious gameplay elements may scare away unprepared players, but once you’ve got a grip on the game – you will witness one of the best modern cyberpunk stories. The player takes the role of an E.Y.E soldier – an elite cyber-enhanced warrior, who opposes demons from other dimensions and corrupt Federation. The game is a wild mix of action-shooters with RPG elements, including the development of cybernetic enhancements, magic abilities, and the guns arsenal of the protagonist. E.Y.E: Divine Cybermancy is non-linear and has several endings, which contributes to its replayability. 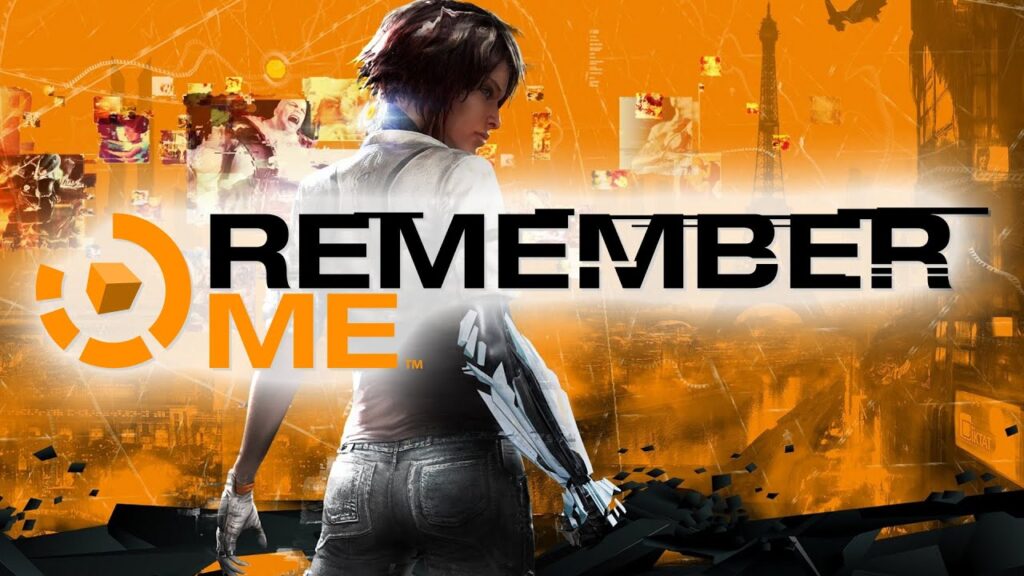 Remember me is a quite unusual game for many things, from setting to the gameplay. The game was developed by Dontnod Entertainment and released in 2013. The year 2084, edition of memories became common practice for this version of the future. Why experience something in person when you may have a perfect memory of the event? The protagonist, the woman, named Nilin, has to learn a dark truth behind the perfect facade. The gameplay mixes beat-em-up, platformer, and puzzle sequence, keeping a player on their toes. The combat system allows personalizing fighting techniques, and puzzles are built around other people’s memories manipulation to get the necessary information. The Daily Telegraph newspaper named “Remember me” as one of the best cyberpunk games. 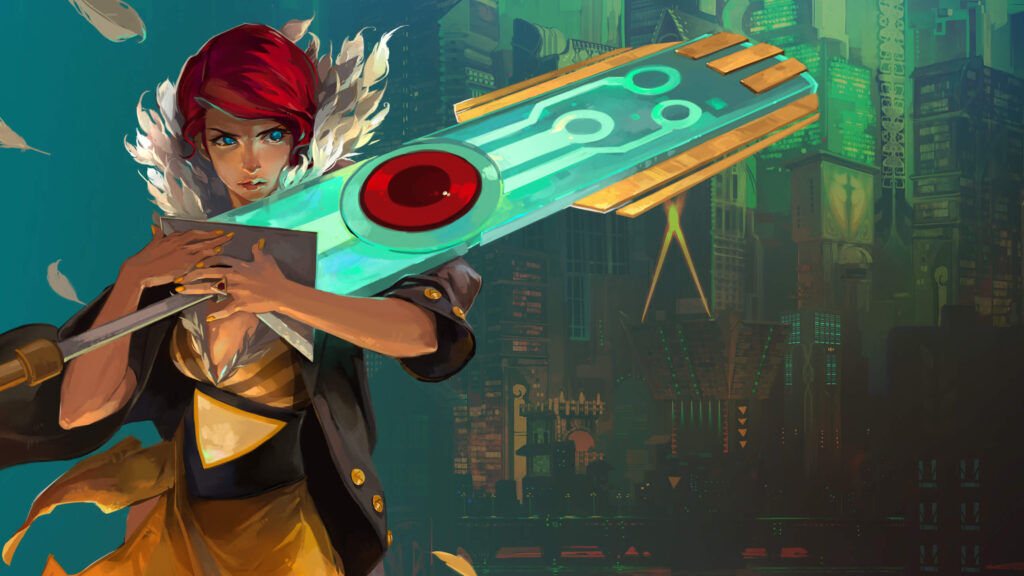 Each release of Supergiant Games is always a small celebration in the indie scene. It is true for Transistor, released in 2014, as well. The game tells the story of Red, a stage singer, who lost her voice and who tries to save her beloved one, entrapped in a giant sword. Transistor has unprecedented visual styles, which combine art Nouveau style and high-tech cyberpunk features, giving a recognizable face for the game. The gameplay is a mix of RPG, turn-based and active combat action: Red has to battle her way through armies of hostile drones and robots to set herself and her loved one free. Another distinguishable feature of the game is the soundtrack, with vocal tracks and background music, which sets the right atmosphere. The game has awards for best strategy gameplay and the best art. 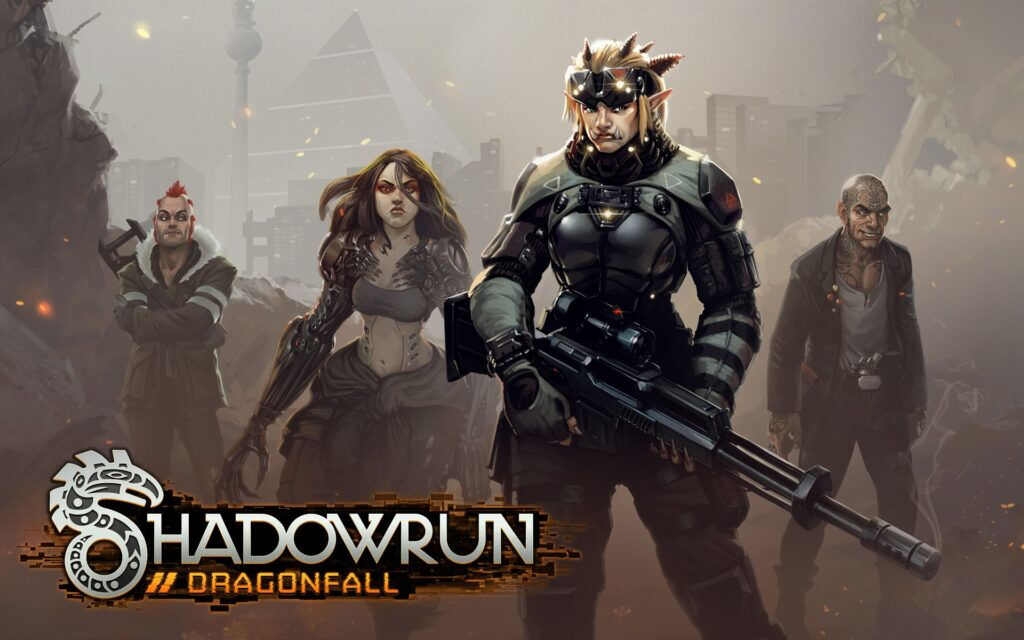 The “Shadowrun” universe made a daring step trying to combine fantasy and cyberpunk settings. Numerous media franchises tried to do so, but Shadowrun succeeded in the field where the others failed. It stands out among other best cyberpunk games. Welcome to the Sixth World, where an orc will wash your car, a dwarf will repair your plumbing, and the CEO of a corporation you are working on is a literal dragon. “Shadowrun: Dragonfall” was developed by Harebrained Schemes and released in 2014. It is a second game in the modern “Shadowrun” series but may freely start your acquaintance with the series from “Dragonfall.” The player takes the role of a shadowrunner, a smuggler, a hired assassin, and a person who does shady work for a good price in general. He has to navigate an unforgiving world of corporate intrigues, magical conspiracies, and cruel betrayals. 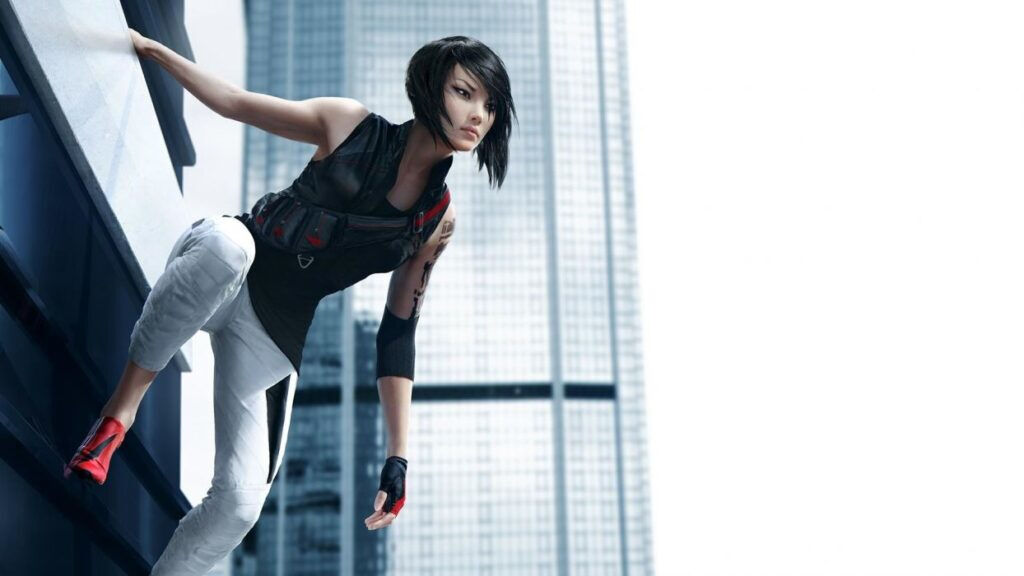 Mirror’s Edge cannot boast of stylish neon streets, advanced cyber-soldiers, or numerous ways of character development. Nevertheless, it is one of the best cyberpunk games due to the topics, which were raised. The game was developed by Dice and released in 2009. The setting of the game takes place in a quasi-futuristic city, where crime is non-existent due to the harsh control of information by the city’s government. The player takes the role of Faith – a runner, who transfers private information bypassing the city’s security systems. The game features first-person parkour gameplay, explicit visuals, and a captivating story. Cyberpunk is not only about the fancy shooting of super soldiers but about society, which shapes the inhuman rules as well, and Mirror’s Edge discloses this theme like no other game. 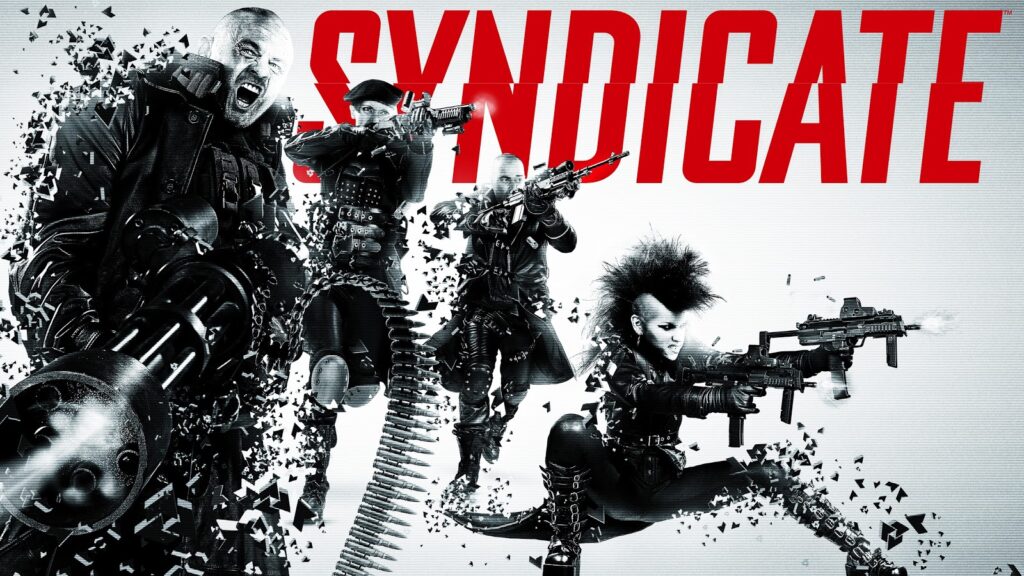 Syndicate is a reincarnation of the old cyberpunk classics of the same name. The game was developed by Starbreeze and released in 2011. We play as Miles Kilo, a corporate enforcer, who does a dirty job for powers that be. Syndicate utilizes all features of the cyberpunk genre and blends them in fast-paced, first-person action. Kilo fights tooth and nail with hacking implants and boosting stimulators to get the job done. The player has a wide variety of tools on how to end the enemy, and killing them with a gun is only the beginning. Besides, Kilo does not save the world, and he is no hero. He is a mercenary who kills people not for freedom or greater ideas but because he was ordered to do so. Syndicate is a merciless and ruthless genre representation in video games. 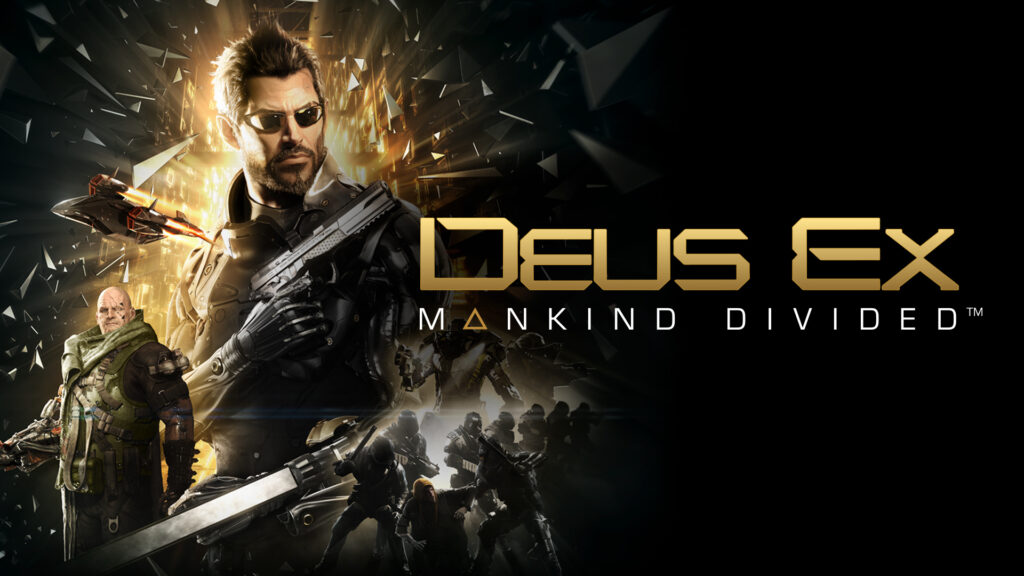 The “Deus Ex” series is one of the brightest examples of the cyberpunk genre, and its final iteration “Mankind Divided” is no exception. The game was developed by Eidos Montreal and released in 2016. Mankind Divided is a direct sequel to “Deus Ex: Human Revolution” and continues the story of Adam Jensen. This time, the cyborg has to investigate a terrorist attack committed in Prague. The game raises the question of social segregation via the conflict of augmented and non-augmented people. The gameplay belongs to the immersive-simulator genre and gives the player freedom in creative ways of different problem resolutions. Deus Ex: Mankind Divided is a prominent example of how best cyberpunk games should look and play. It was a nominee on TGA 2016 as the best roleplaying game and best game innovation. 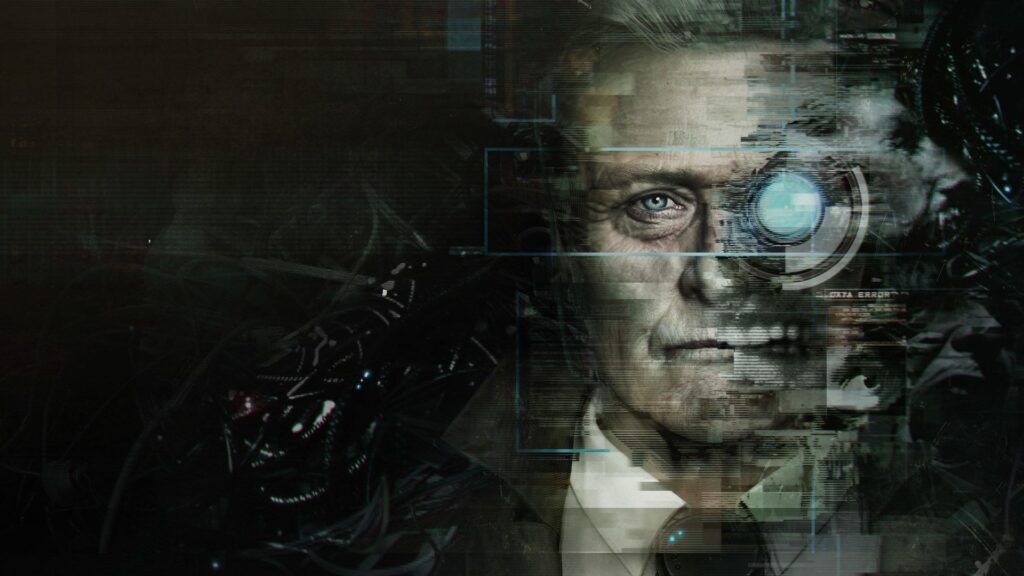 Observer is a brave experiment of combining cyberpunk and horror genres. The game was developed by Bloober Team and released in 2017. We play as Daniel Lazarski, an observer, who has to investigate a series of mysterious homicides in a tenement building. When Daniel arrives at the scene, the building is shut down, and the observer is trapped with the horror within. The game uses the theme of cyberpunk augmentations as a means to reach people’s subconsciousness. Daniel has to go through surrealistic, nightmarish visions of the murdered people to find out the truth. Observer creatively utilizes its limitations and creates a tense atmosphere of suspense. The gameplay is a first-person puzzle mixed with survival horror sequences. Observer really can make technological singularity look frightening.

1. I have no mouth, and I must scream 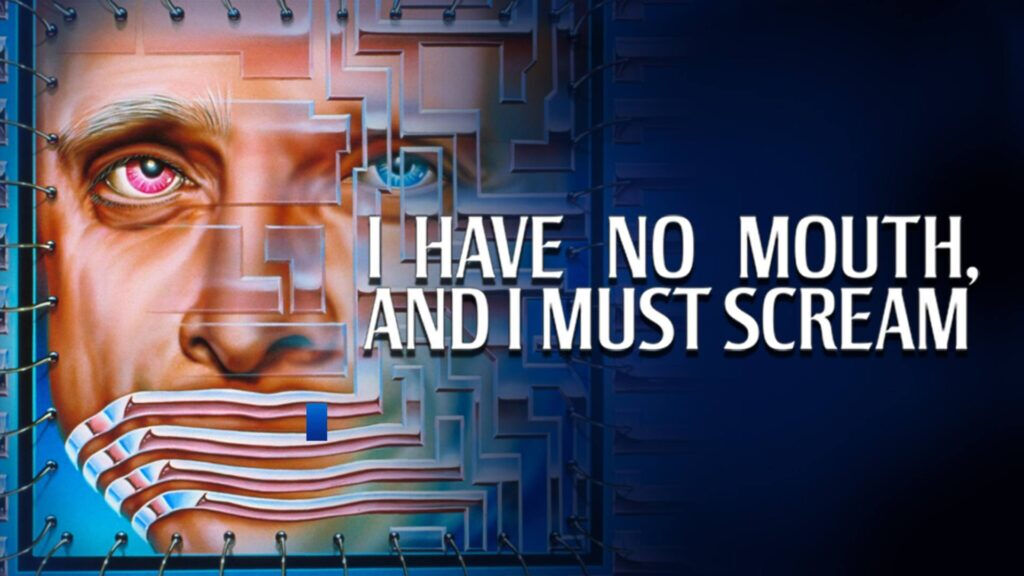 There are numerous games, which are more advanced, more graphically perfect, and more entertaining than “I have no mouth, and I must scream”, but this game transfers the essence of cyberpunk like no other. The “I have no mouth” game is based on the Harlan Ellison novel of the same name. The game was developed by Cyberdreams and released in 1995; “I have no mouth…” reissue was in 2013 for modern platforms. “I have no mouth…” tells a story of a grim future, where a supercomputer named AM overtakes the Earth and brings humanity to extinction, keeping only five people alive and torturing them for thousands of years. We take the role of these five to go through another cycle of torment just to have a chance to get revenge on AM and give humanity new hope. The game is a classic point-and-click adventure, with interesting puzzles and explicit visuals.

The upcoming Cyberpunk 2077 will replenish the list of the best cyberpunk games and will give a new genre’s interpretation. To follow the latest updates concerning this and many more best cyberpunk games, you may subscribe to our channel – “What’s happening?!” Here we create video game overviews, share interesting facts, and look at the industry’s novelties. Video games are often closely connected to the movies and literary genres and contribute to their development. On our channel, you will find close analysis of different genres development and how they are utilized in video games, and cyberpunk video games are only one of the many examples. The creative decisions behind games’ visuals, story, or gameplay designs are the real charm of the gaming industry. On our channel, you will learn what makes good games distinct from legends, and how video games became immortal classics. Besides, the gaming industry is not about games only but about the people who create them and their stories. best cyberpunk games often have hidden mechanics, easter eggs, and secrets, which are well hidden from a regular player, and you may not find them even after several playthroughs. On our channel, you will find video games` secrets, tips, and tricks on how to play more efficiently. If you want to know what’s happening – visit our channel.