Anime is a pretty unusual genre. It has particular features in storytelling and visual representation, with long-established canons. At the same time, these canons may push away an unprepared audience. Big eyes and faces of characters, emotional exaggeration, almost non-existent moments of peace and silence – all of these items create the charm of anime and make it almost unbearable for not versed viewers. A more complex question is anime video games – interactive storytelling brings new possibilities and limitations for the creation of a good anime-style game, and the idea is beyond simple visuals. Therefore, the creation of the best anime games requires double efforts. Luckily, we collected top of the best anime games for you to enjoy the top-quality interactive madness.

It is not even my final form. Best Anime Games

The Final Fantasy series is something obscure for the general public and yet something that is well known among the best anime games. There were good and bad chapters of the franchise. However, the general quality was usually high. To break the wall of incomprehension, Square Enix released in 2020 “Final Fantasy VII. Remake”. It is a modern interpretation of a classic FF chapter. The plot revolves around the “Shinra” corporation, which kills the planet on which people live, and the eco-terrorists group “Avalanch,” which opposes “Shinra.” It consists of charismatic personalities in addition to the main hero. The combat is fast and smooth; the graphics are modern and enjoyable. However, the story covers only the first part of the original, and future episodes of “Final Fantasy VII: Remake” are in development. A right modern interpretation. 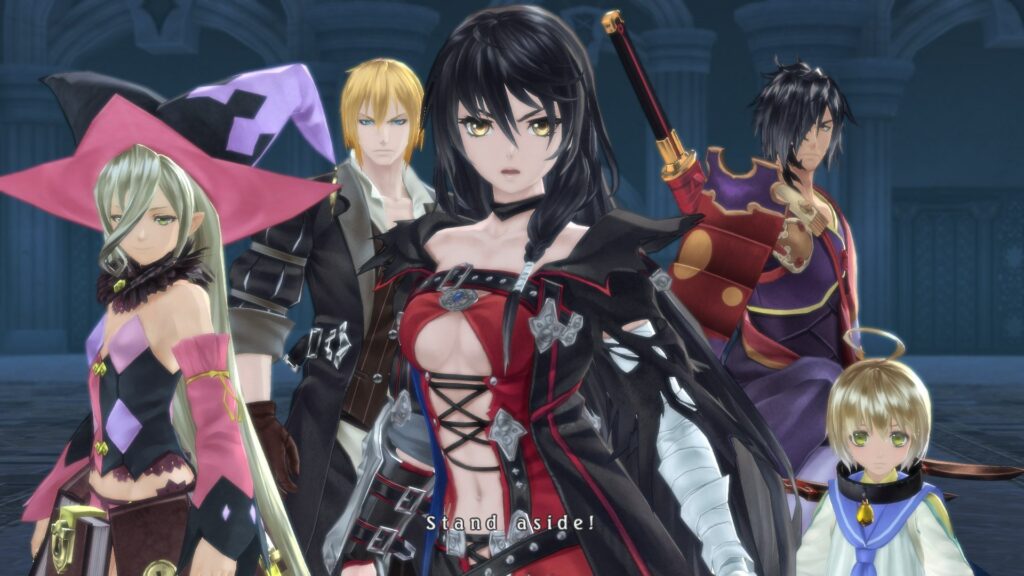 The series “Tales of” is similar to other JRPGs franchises – each game is a new story in a new world with new characters as the protagonists and antagonists. Still, each game inherits features common to the franchise and best anime games in general. Tales of Berseria is the last iteration, developed by Bandai Namco and released in 2017. The game tells the story of Velvet, a girl, by the will of fate, turned into a half-demon, and now seeking revenge against the whole world. She finds allies and friends in this long and difficult quest, which ends up as a non-trivial story of anti-heroes. The gameplay is dynamic and engaging; it requires both tactical thinking and the right performance. The difficulty of the game is flexible, so the challenge is optimal for most of the players. 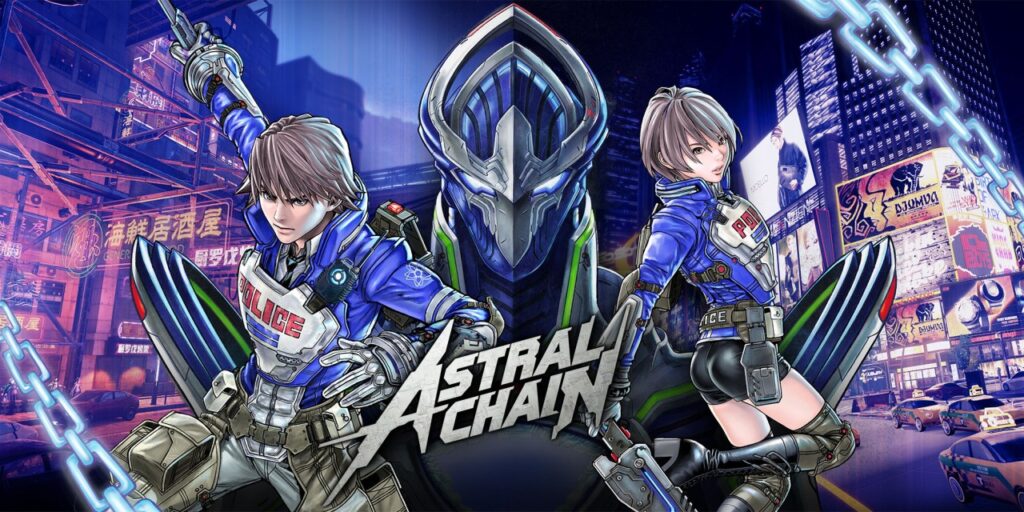 Platinum Games does not stop to surprise and re-invent the genre of slashers. Its last game, Astral Chain, was released in 2019. The year is 2078; humanity is on the verge of collapse because of inter-dimensional invaders. The only hope against the enemy is to enslave one of them and turn it into a weapon. Your character wields this weapon, and you ought to stand against the hordes to keep the city of Ark safe. The gameplay mechanic features controlling two characters simultaneously, turning their abilities into long chains of combinations. The graphics are decent; the game has a calm and stylish visual representation. The story is a bit clunky but still satisfying and engaging. 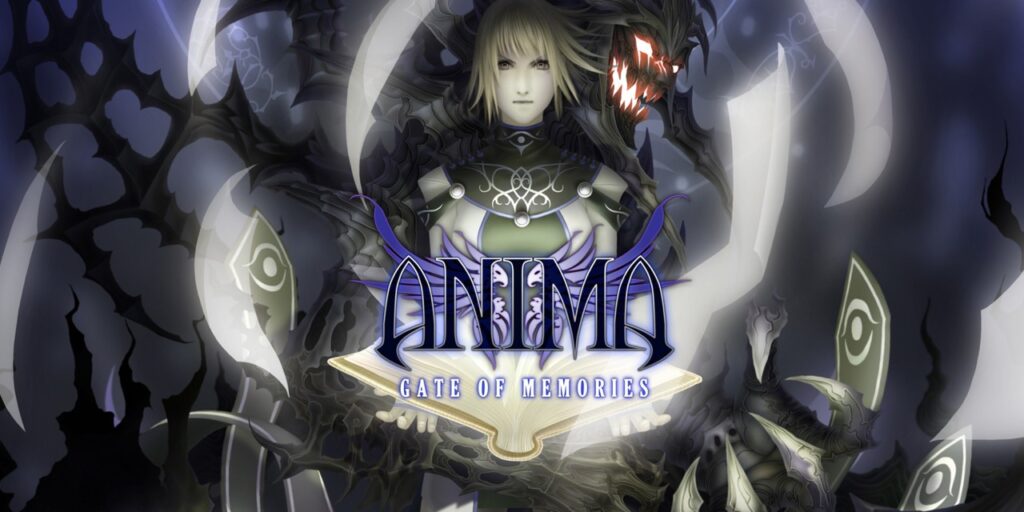 Anima: Gate of Memories was developed by the “Anima Project” team. It is a part of a bigger franchise, which includes a tactical skirmish game and a tabletop RPG. Anima: Gate of Memories expands the world of Gaia and animates significant figures of the setting into full-fledged personalities. The story is set in a high-fantasy world. At the same time, it becomes personal and touching beyond magical shenanigans. Despite the European origins of the developers, Anima keeps anime visual features and style, which transcends the idea of anime as solely a Japanese form of expression. The gameplay is a combination of slasher and RPGs mechanics, which keeps it fresh and motivates a player to keep going.

Available on: Pc, Ps4, Nintendo Switch, Xbox One, Wii U. 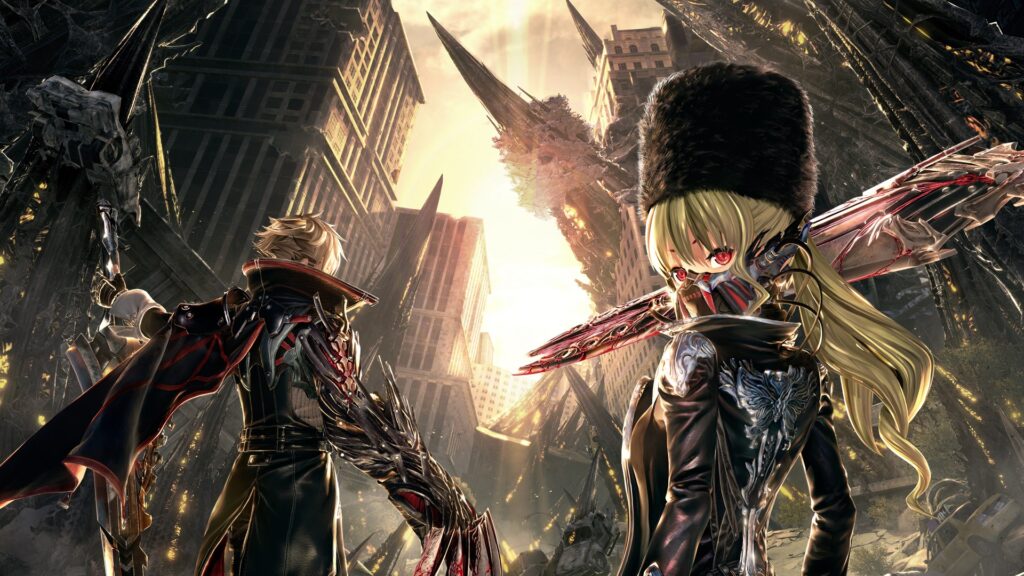 Сode Vein differs from other best anime games in many aspects. Developed by Bandai Namco and released in 2019, Code Vein mixes such things as anime visual style, hardcore gameplay inherited from the “Souls” series, and a dramatic story about humanity, its loss, and recovery. Once again, mankind is about to extinct, and revenants, reviewed corpses with bloodthirst, have to save it. We play as one of these revenants and need to battle our way through tough and powerful enemies to restore our memory and stop humanity’s downfall. The game allows changing character archetypes on the go, adjusting playing style for certain situations, and brings a partner alongside you, to make the journey less lonely. Giant bosses, strong emotions, and challenging gameplay included.

5. Ni no Kuni: Wrath of the White witch 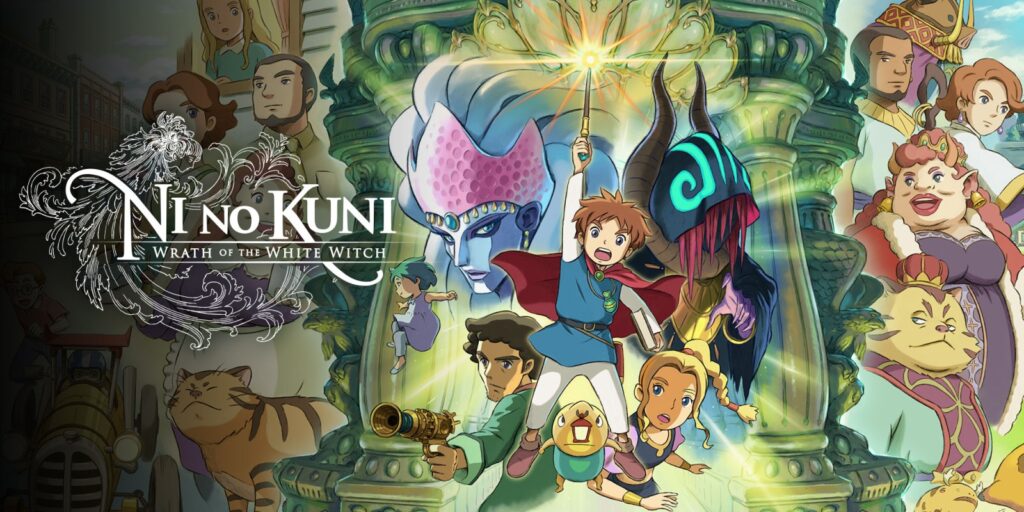 It is a surprising fact, but there are not many of the best anime games for children. Most of the titles are brutal, mature stories, which hardly fit for a smaller audience. Ni no Kuni is a rare gem, which masterfully fills this gap. The game was developed by the Level-5 studios and released in 2011. The reissue of the game was in 2019. Ni no Kuni: Wrath of the White Witch tells a simple and, in a good way, a naive story of a boy who travels to fantasy land. He needs to save his mom and a magical kingdom from the great disaster of the White Witch and her Dark Djinn. The most distinguishable part of the game is 2D animated cutscenes, created by Studio Ghibli, which turns Ni no Kuni into an interactive anime cartoon. 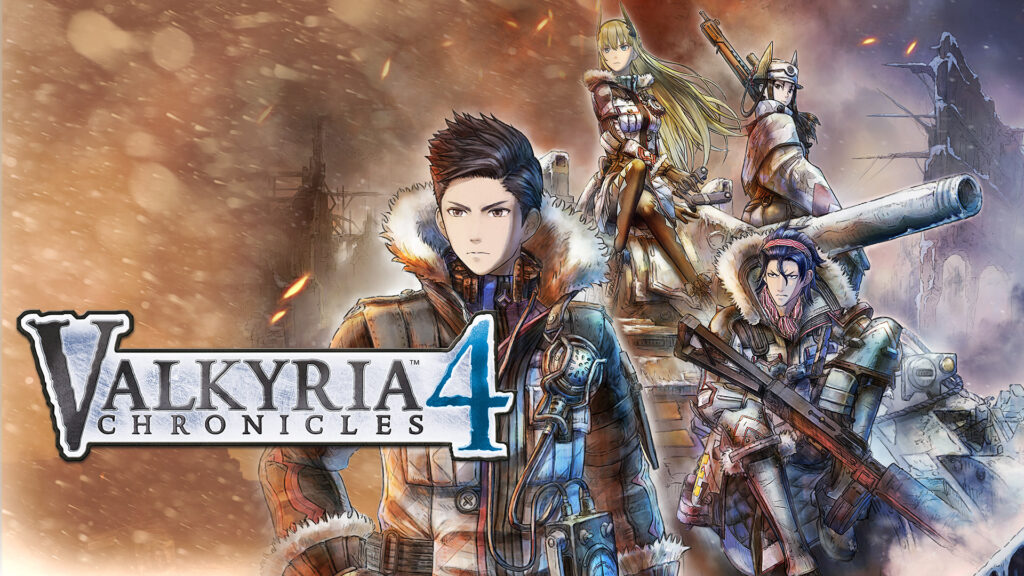 The Valkyrie Chronicles series is an outstanding mix of genres. It is a JRRG, tactical wargame in an alternative WWII setting, with anime visuals. Developed by Media Vision and released in 2018, Valkyrie Chronicles 4 offers a new war drama story where you go through difficulties and losses of the battlefield as a troops commander, making tough decisions and putting up with defeats. The gameplay masterfully combinates tactics, third-person shooting, and strategy. In the end, the game is a solid product and unique experience as one of the best anime games. 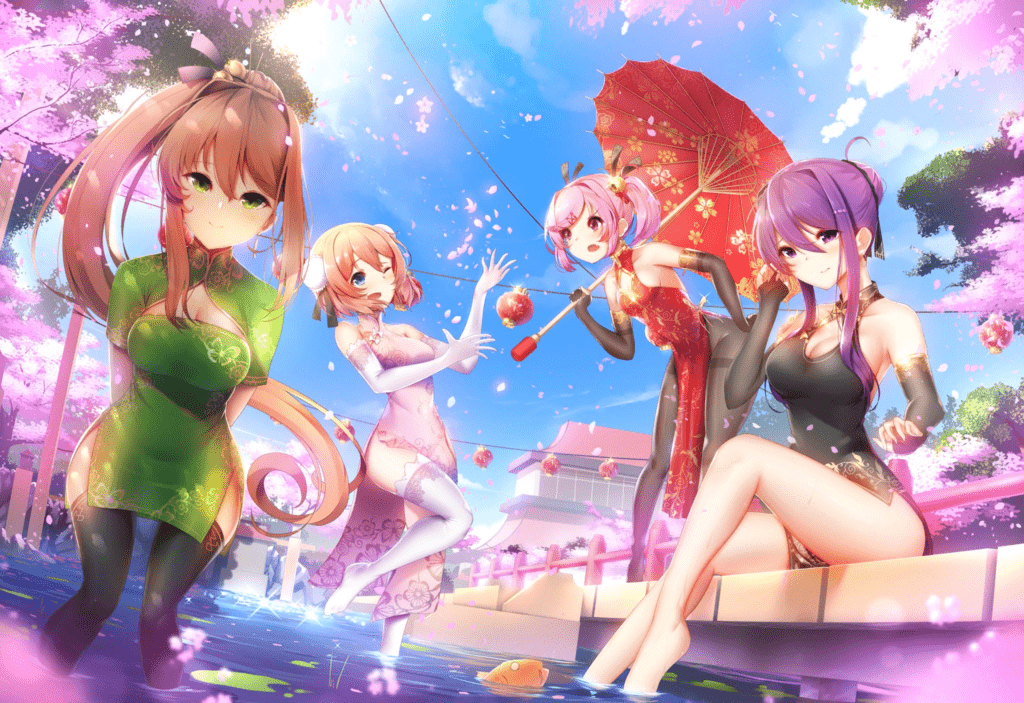 Doki Doki Literature Club is an unprecedented game in the industry. You will receive the whole experience if you won’t read anything about this game and just play it. It is worthy of the time, believe it. Still, the game was developed by Team Salvato and released in 2017. At first glance, it is a regular visual novel, with cute anime girls. They compose poetry, drink tea, and have their regular school lives. However, the masterful breaking of the 4th wall, genre cliche deconstructions, and a huge final won’t leave anyone indifferent. One of the best anime games in the visual novel genre.

Catherine is a very unusual puzzle game developed by the “Atlus” team and released in 2011. The story is about a scampish man named Vincent. He is in his thirties, has a long-time partner, Katrin, who asks him about starting a marriage and have a decent family life. However, the story takes a sharp turn when Vincent meets Catherine, a frivolous girl, who doesn’t mind having fun without any serious ties. Now Vincent is standing before the choice of his life. The gameplay happens in a surrealistic dream, where Vincent has to move blocks to escape his horrors and insecurities. A light-hearted story and stimulant puzzle gameplay make “Catherine” one of the best anime games. 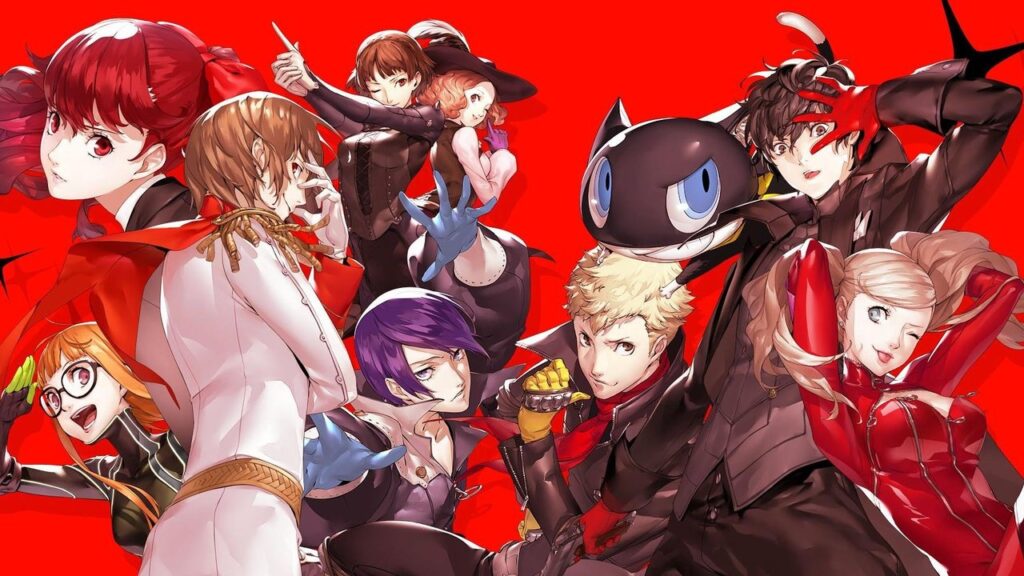 The “Persona” series is a great mix of the JRPG genre and modern fantasy setting. Each game is not only a separate story but an occasion in the gaming world. Persona 5 was no exception. The game was developed by Atlus and released in 2017. The game tells a story of a regular schooler, who finds himself in a hostile environment of a new place, and has to oppose the very flaws of human nature. In order to do so efficiently, the protagonist has to develop the power of his heart by being kind, intelligent, strong, and masterful. It is the element that makes Persona 5 so special – it motivates you to be better beyond the game. Top 1 among the best anime games.

Anime has stepped out of its niche and can be considered a world’s heritage but not a subject of one specific culture. Europeans and other Asians make the best anime products, which may even surpass certain Japanese analogs. However, there are far more awesome games beyond the anime genre. You may learn about them on our youtube channel “What’s Happening?!” Here we create video games overviews, tell interesting facts about video games and the gaming industry, share unusual and interesting stories. Here you may find videos about your favorite games’ analysis or discover something new. We aim to create not only entertaining but informative content also. You will find something to laugh about and to think about. Video games are not only fun and leisure but also the creativity of people who make them. Interesting techniques, art decisions, and tricks how to make more from less. We want to share these stories and give you a wider sight of the gaming industry as a whole. If you want to know what’s happening – visit our channel.