About World of Warships Review

Wargaming.Net is a famous game-development studio that focuses on creating immersive and realistic online skirmishes with war machines. World of Tanks and World of Warplanes became undisputable hits with millions of players across the globe. Both of the games are famous due to the realistic behaviors of tanks and aircraft, modern graphics and physics, and regular updates. To complete the series of machines warfare, Wargaming released World of Warships – a game about clashes of battleships in the South Pacific and glacier field of Alaska. The era of battleships was short in real history because air-carriers made them obsolete. However, the game brings the romance of steel armadas fights in well balanced online deathmatches. Unlike tanks, battleships don’t have a dense city landscape. Unlike fast planes, the ships cannot maneuver or escape the fight. Warships are more vulnerable and less agile than other machines, which require more tactical planning and teamwork. 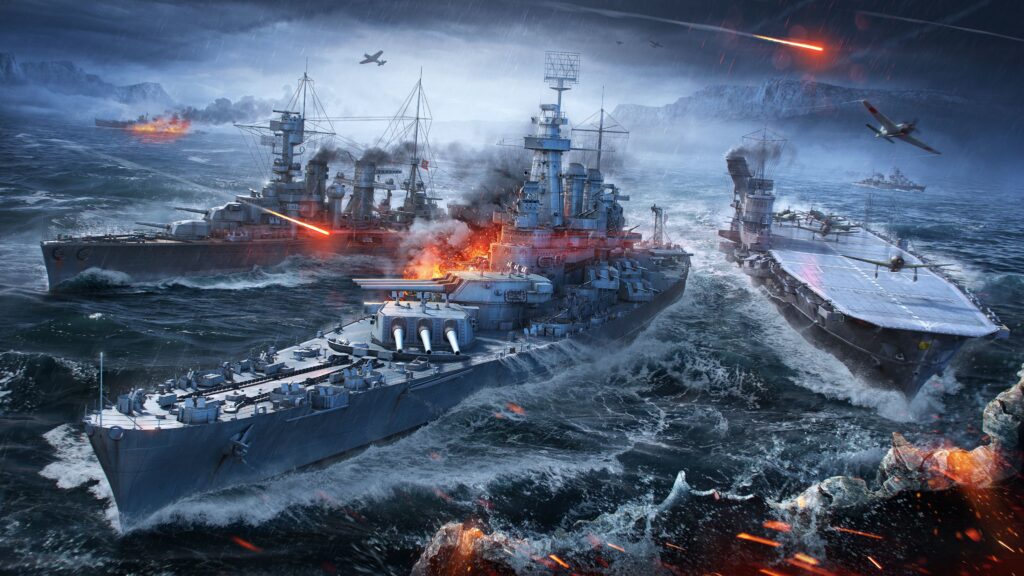 Two teams of battleships spawn in a water area to destroy each other or to capture and hold key points. Both regimes require similar tasks to best the enemy’s team, but capturing points require more strategic planning in addition to regular tactical maneuvers.

A player controls a battleship in one of several classes: carriers, cruisers, battleships, and destroyers. Each of the ships has its role in the teamwork and specific gunplay. The warships are much slower than tanks and aircraft. Therefore, each maneuver, moving, aiming, and shooting, require more time and precision. First-tier beginning ships may shoot each other from a distance in a few kilometers and reload relatively quickly. A battleground may look like a boiling pot at the beginning. However, with more progression and the more ships unlocked, the more tactics demand the game.

A cruiser may shoot once a minute, as well as turning slow. This means that each missed shot is an opportunity for an enemy to unload his guns at your ship. To succeed in World of Warships matches, a player shall learn how to aim with advance and plan how an enemy would react to your fire. Air-carriers may represent a game within a game. When a player chooses an air-carrier, they have to apply their strategic understanding of the game and send help to the sides of the battlefield where it’s needed. This sort of gameplay may be a bit passive, but after an air-carrier match, cruisers and destroyers feel more fresh and engaging. These requirements turn battles in World of Warships into complex tactical puzzles with the unpredictability of real people as your opponents. 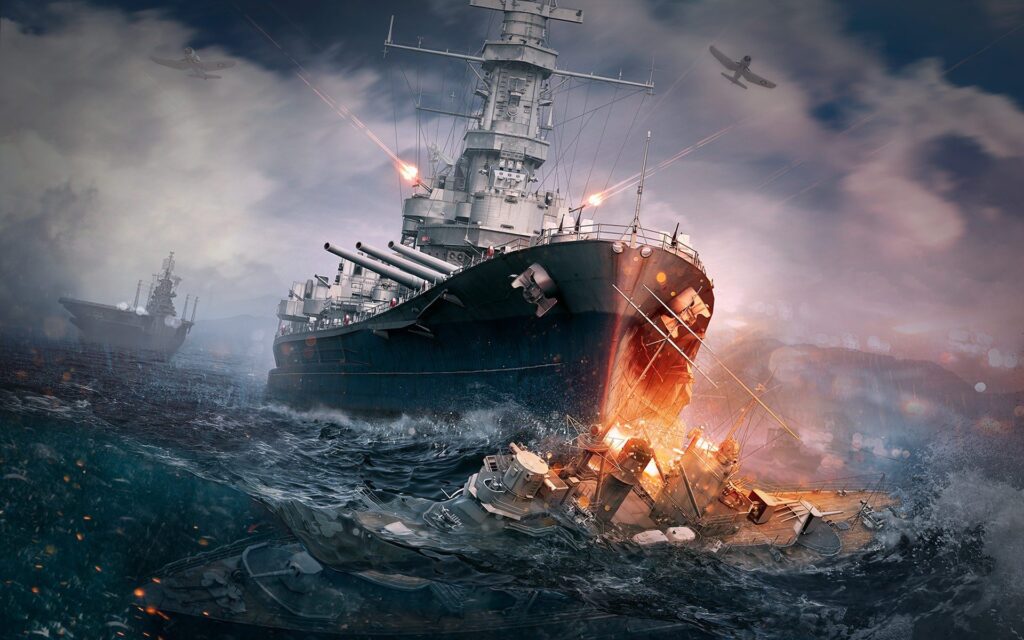 However, the skill of a single player does not win matches. The key component to a successful fight is coordinated teamwork and accurate realization of each ship’s class features. Destroyers are agile and maneuverable in comparison with other ships; their task is to scout enemy lines and lure the opponents into the team’s line of fire. Cruisers are a universal solution for attack and defense, a perfect weapon against enemy aviation and destroyers. Battleships are the toughest and the most powerful ships on a battlefield. Their task is to eliminate other battleships and any enemy in their line of sight. However, they are the slowest as well, which makes them dependable on cruisers’ defense. Finally, carriers ought to provide support and intel as overseers of the battlefield. Coordination and cooperation between different classes of the ships is another layer of World of Warships gameplay.

There are issues when a battleship separates from the team and gets obliterated in the first minutes of a match, or a teammate destroyer kills itself on the enemy’s torpedoes. Still, these are only single cases. In general, people try to cooperate in matches and play their roles respectively. 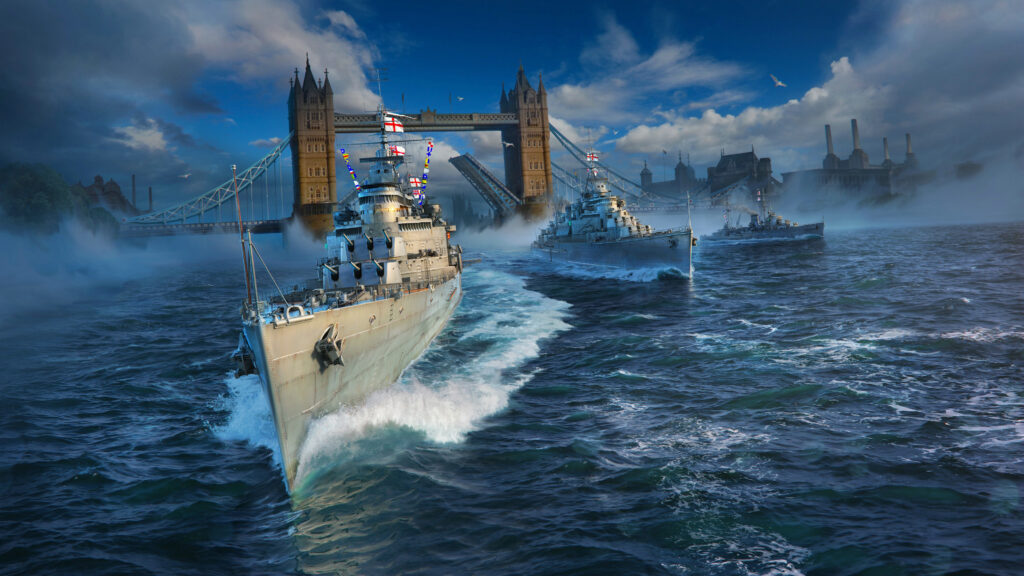 The matchmaking system of World of Warships is closely related to the game’s progression. Therefore, you won’t be thrown in a battle with more experienced players with elite ships from the beginning. At the same time, if you are already an experienced captain, you will face opponents with same-tier ships and an approximately equal amount of experience. There are ten tiers of ships and ten tiers of battle, accordingly. Each tier opens new power-ups for ship development and new, more advanced models of battleships. You may unlock them via playing the game and in-game currency. There are purchases for real money in the game shop, such as boosters of experience of premium in-game currency. However, they are not mandatory, and you may receive full experience just playing the game. Besides, there is a subscription function, which makes certain premium features available.

Finally, the game just looks amazing. Gunfire, weather, and water effects are well detailed and look remarkable for modern standards. Besides, the game is packed with a bunch of visual options, which make even not so powerful setups run this game smoothly. Quality of sky and quality of water may be the most essential graphical parameters because they consume most of the v-ram. Battleships look realistically in any visual option. So, you will always have a choice between the performance and quality of the image. 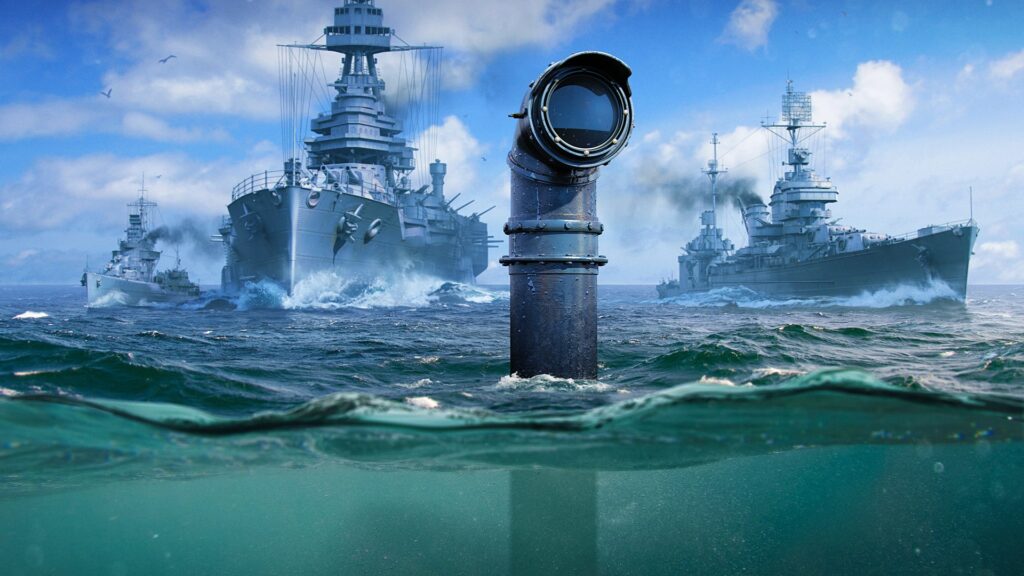 Just like World of Tanks and World of Warplanes, World of Warships features different classes of battle watercraft and various nations, for which you can play. 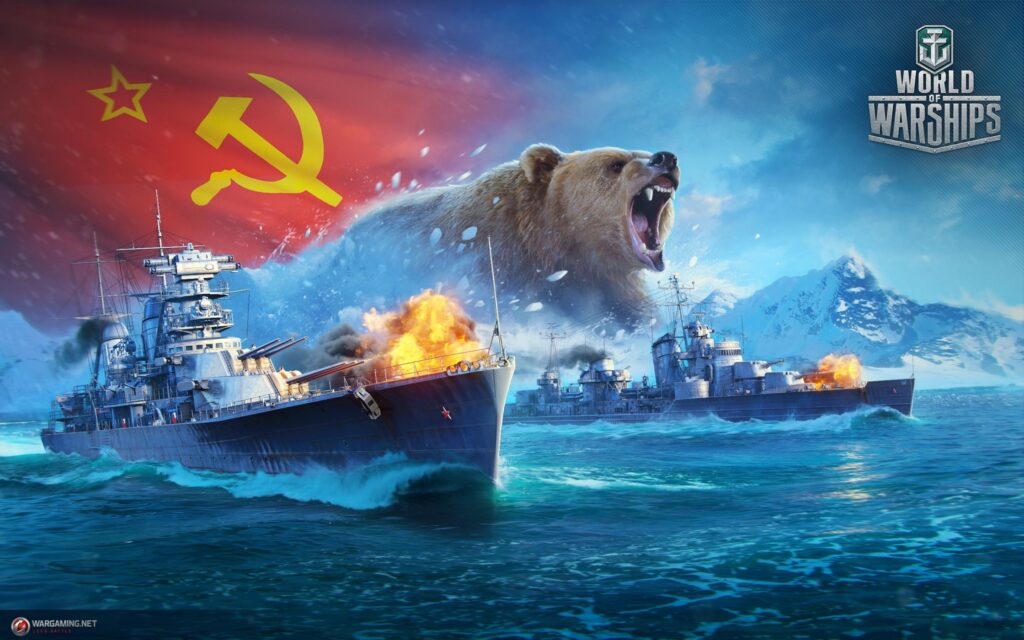 The battleships of the Russian Empire and the USSR are characterized by good armor, powerful main battery at medium and short-range, and good speed. Cruisers are represented by two branches: light-medium and long-range ships with good ballistics, rate of fire, and decent HE shells. The highlight of heavy cruisers is their efficient armor-piercing shells and improved armor. The main branch of Soviet destroyers is larger and more survivable than the pure destroyers. These ships focus on constant movement and continuous bombardment of the enemy from a maximum distance. A perfect choice for a safe play in World of Warships. 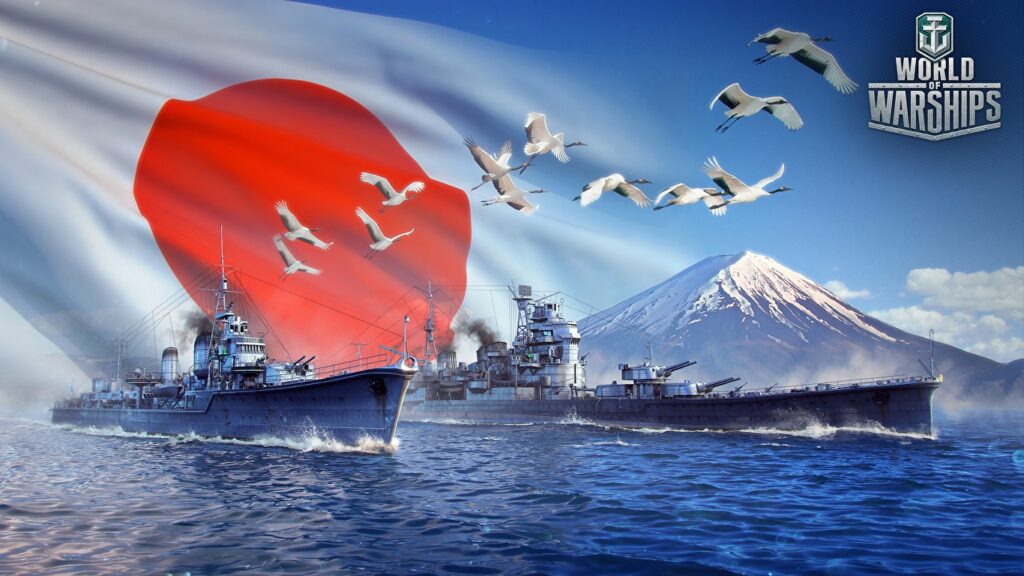 The Japanese navy ships prefer the speed and power of weapons to armor. Torpedo destroyers and cruisers will appeal to fans of powerful and long-range combat. Also, cruisers and representatives of the branch of artillery destroyers have high damage to HE shells. Battleships intimidate opponents with their main caliber and firing range. 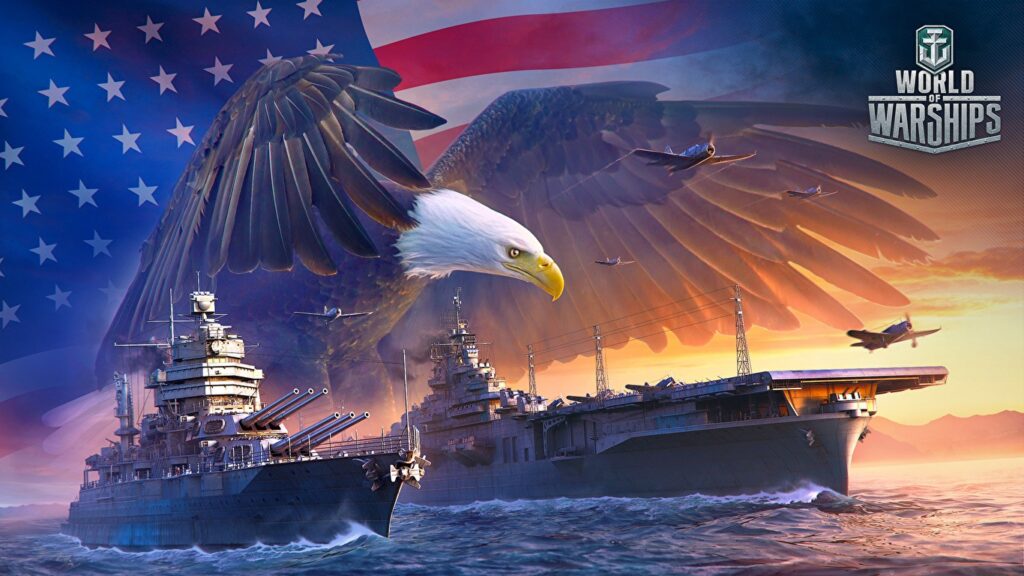 Versatility can be called a common feature of the American ships. The ships of this nation are the best at dealing with air raids, have decent armor and powerful artillery. Battleships are distinguished by a large number of main battery guns, as well as good damage from AP and HE shells. The cruisers boast a high rate of fire, and the hinged trajectory of the projectile will allow them to fire over the islands. The destroyer class is most effective in supporting allies. American carriers are armed with decent HE bombs and have a decent balance of speed and survivability. 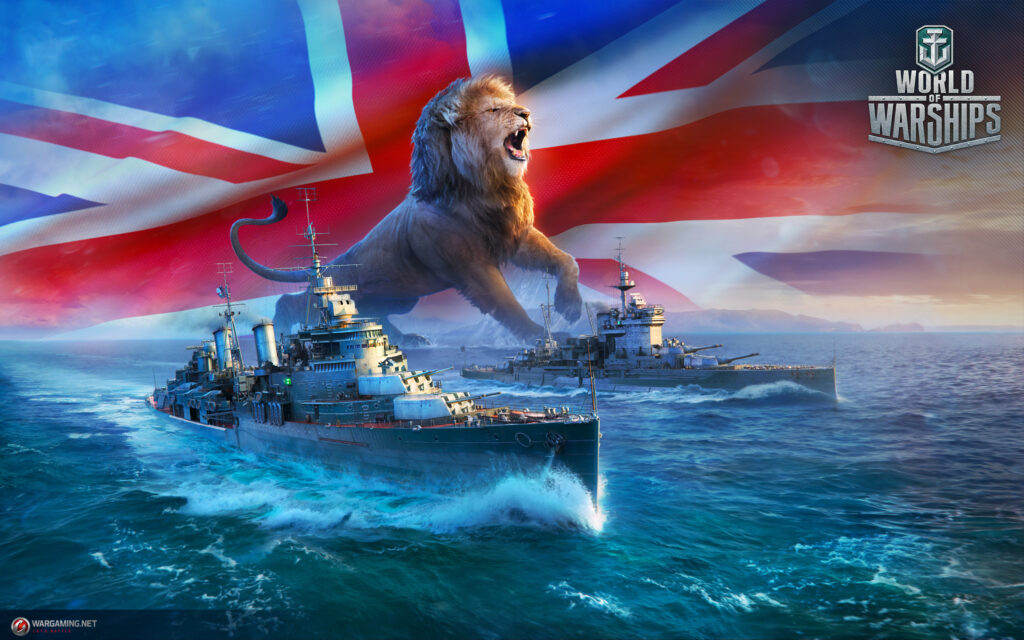 The ships of the British Royal Navy in World of Warships will appeal to fans of extravagant solutions. Unusual shells, equipment, and other unique features distinguish the British watercraft from ships of other nations. The features of the British destroyers are the tube launch of torpedoes, a large stock of smoke disguise, and quick reloading of the shells. Battleships are distinguished by significant damage and armor penetration of HE shells and the improved Repair Party consumable. 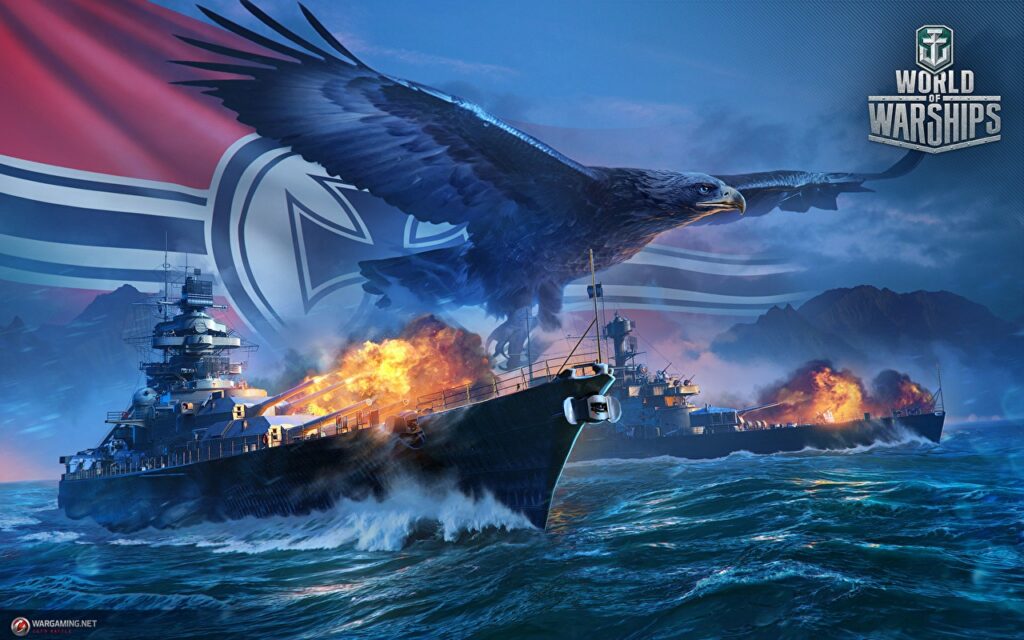 Among the main advantages of the ships of the German fleet are armor and armor-piercing. Few can compete with German battleships in their ability to take blows and push through. Cruisers and destroyers are famous primarily for their armor-piercing shells and decent torpedo armament. Representatives of Germany – ships for players who love aggressive and decisive action. 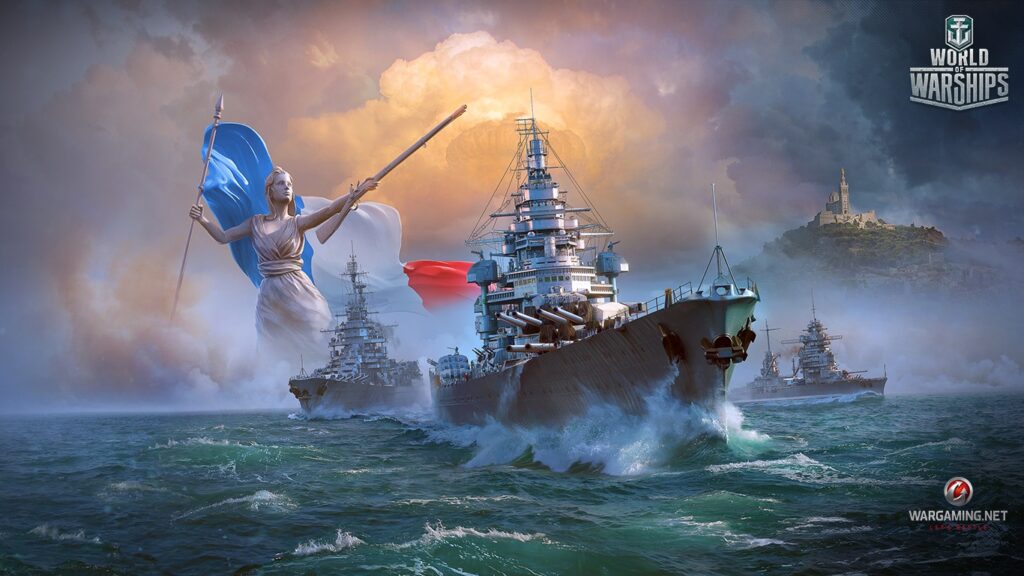 French cruisers are fighters with effective artillery, high speed for their class, and long-range torpedoes. Among battleships, you will find both classic dreadnoughts and more modern ships, including those with four main battery turrets. This feature on high-tier battleships is complemented by the large firing range of the secondary battery and the Forsage on tier 8-10 battleships. Fast French destroyers will appeal to fans of active gameplay.

But the most important feature of World of Warships ships is that you want to return to the game. The low-tier ships are fun to play, and further models are developed with all attention to historical details and technical characteristics.

World of Warships today is a popular and expanding game. The developers add new regimes, interesting seasonal events, and new nations with their unique ships. To follow the updates of your favorite game, visit our channel “What’s Happening?!” Here we create video games review, novelties of industry, interesting facts, and gaming tips. Wows is one of many sessional games. You will find interesting tops on our channel, dedicated to different genres, themes, and periods. You may discover new games and explore the best from new genres. If you want to know what’s happening – visit our channel. 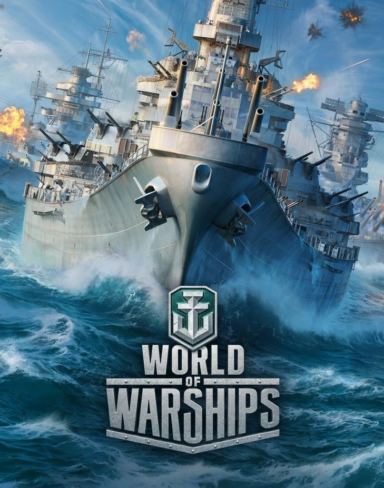